RISAT I In the Orbit

The Radar Imaging Satellite (RISAT-1) lanched successfully via satellite launch vehicle PSLV-C-19 from Sriharikota range on Thursday, April 26, 2012, The all weather satellite will help in better agriculture and disaster management

, an step forward to make india self reliant. Congrats to RISAT -1 Engineers, Scientists and Team Members! 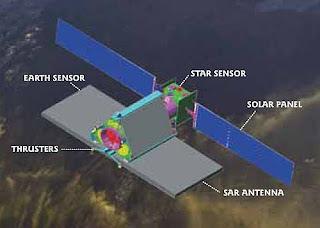 The weight of the spacecraft is 1858 Kg, it's first microwave remote sensing satellite.

N. Valarmathi was designated as Project Director to build an indegenious spacecraft, she included 50 other membres in the team and RISAT-1 developed, its 100% Indian Space Satellite, only Indian companies supplies the resources to develop this space gadget.

Other countries which have similar space technology till date are - US, Canada, Japan, Germany and Israel.

Popular posts from this blog

December 29, 2020
Do not read to learn. Kids go school for reading and comeback exhausted. In many higher education institutions Ph.D candidates read and compile thesis based on how much they have learnt based from reading over say 3 or 5 years or may be more sometime with grant or without grant. Often I have seen one trend the people who impress you own many books, think any name that come to your mind and check what the person read. You will find a coal business person may have books on literature. A mathematics professor may have books of archeology. Talk to them. Often you will find the person attached with a certain profession can only speak or debate around that area only. Or discuss something random and you will be taken that certain area of work or passion. Consider sports. Cricket. Jonty  Rhodes best fielder and enjoys water sports.  The successful people are open, they learn from everywhere and apply those ideas in personal development and profession. No matter how many money making classes yo
Post a Comment
Read more

May 16, 2018
Mergers and Acquisitions makes business world dynamic. The largest example to this I have seen when Marissa Mayer joined Yahoo Inc. The girl is really rocking with her excellent business strategies. Today most of the businesses have Facebook Page for company / organization. When someone acquires a business, owner also wants to get control on Facebook Page so as to take old customers along. Here is how to transfer Facebook Page ownership.
Post a Comment
Read more

October 30, 2020
More often I received requests to improve website SEO or build a new website or improve an existing one. One common problem with lot of those website owners and bloggers is they do not have any documents about their expectations. They say do it best, do it as you like, I mean business. Or maximum they present some similar site. Imagine a legal professional showing you a similar site and its about a hotel or resort. That is not the story of most novice only. Even people in IoT business since over a decade and software professionals act numb. This simply put off me. Whenever you start a blog or website, ask yourself Why I am creating this website? Who are my prospects? What I expect from this website? How this website well fulfill my expectation? How I want this site to look like? How I will promote this website? How often I will need upgrade? How much budget and time I can allocate for this? Write down answers to above questions and any additional one that you have? To help you design p
Post a Comment
Read more